Written on September 4th, 2020 by Shelia 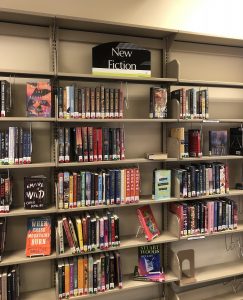 It’s a new month, and we have new books and DVDs! Today I’m featuring some of the new Adult Fiction, regular and Large Print, but if you’re interested in Nonfiction and DVDs, keep your eye on this space next week. (Next week, starting Tuesday. Reminder that we are closed Monday for Labor Day.) Place a hold on any of these items on our catalog.

Shadows in Death by JD Robb

The Trouble with Peace by Joe Abercrombie (I love this series so much!!! Super excited for this.)

To Sleep in a Sea of Stars by Christopher Paolini

An Amish Singing by Amy Clipston

Nothing Ventured by Jeffrey Archer

Someone to Romance by Mary Balogh

On a Coastal Breeze by Suzanne Fisher

Truth and Justice by Fern Michaels

Then She Vanished by Jefferson Parker

All the Devils are Here by Louise Penny

Question of Betrayal by Anne Perry

Golden in Death by JD Robb

Unveiling the Past by Kim Sawyer

Forever by Your Side by Tracie Peterson