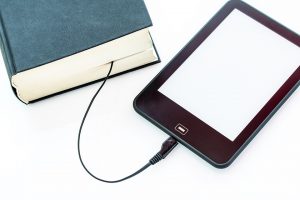 This past Friday, Macmillan Publishers’ new ebook pricing model for libraries went into effect. So, what exactly does that mean for you, a library patron who enjoys library ebooks? The simplest way to put it is you’re going to be waiting longer for ebooks published by Macmillan. So long, Macmillan hopes, you will stop using the library and buy their books instead.

Let’s look at a book that’s about to come out under these new terms. Nora Roberts, one of Macmillan’s top authors, has the third and final book in her Chronicles of The One series, The Rise of Magicks, coming out November 26. On that day, the Ohio Digital Library, a consortium of over 170 Ohio libraries, will be allow to buy ONE copy. That one ebook will cost $30 and ODL will own it forever. After the book has been out eight weeks, so on January 21, 2020, the consortium can “buy” (lease would be a better word) as many copies as it wants for $60 that will expire after two years or 52 checkouts. (Because books check out for 21 days, it is almost always going to be two years, never coming close to 52 checkouts.)

The Ohio Digital Library and several of its member libraries, including North Canton, are in a unique position, and this is where it gets ridiculously complicated, so bear with me. Originally, Macmillan said each library or consortium could buy one copy for the first eight weeks. (This applies equally to enormous libraries serving millions, like Los Angeles, and tiny rural libraries serving a couple thousand people.) Then Macmillan told the Ohio Digital Library they would do something special for them. (I assume they made this offer to other consortia, but I honestly don’t know.)

Macmillan titles are no longer going to work like that, though. Macmillan has decided they are going to allow libraries with Advantage accounts to buy one of those initial $30 permanent copies just for their patrons. That’s great, right? On the surface, sure. But Macmillan has also said going forward, we will no longer be able to share any of our Advantage copies with other libraries.

Let me paint a scenario to explain what all this actually means.

On November 26, I buy one copy of The Rise of Magicks for NCPL patrons and ODL buys one copy for the entire consortium to share. Between that date and when I can buy additional copies on January 21, the copy I bought will probably be checked out 3 times. As of now, three weeks before the book is even available, there are already nine NCPL patrons on hold, and 810 in the ODL consortium. I don’t want those NCPL patrons and the others sure to join the hold list to wait months and months for the book. But if I buy a copy just for NCPL that can never be shared with other libraries for $60 that we only own for 2 years, that’s a pretty terrible cost per checkout ratio the library simply can’t afford to pay indefinitely for every Macmillan title.

Honestly, as I start seeing these huge hold lists on Macmillan titles, I’m not sure what to do. I want to buy the ebooks NCPL patrons want to read, but if the scenario I just sketched is expensive for Nora Roberts, a popular author whose work I know will checkout, how much can I afford to spend on new and midlist authors without Nora Roberts’s track record? It’s a brave new world out there, and hopefully we can navigate it together.

PS The American Library Association’s petition to Macmillan’s CEO has over 180,000 signatures and is still accepting more. And be a proud Buckeye today—more Ohioans have signed the petition than people from any other state.