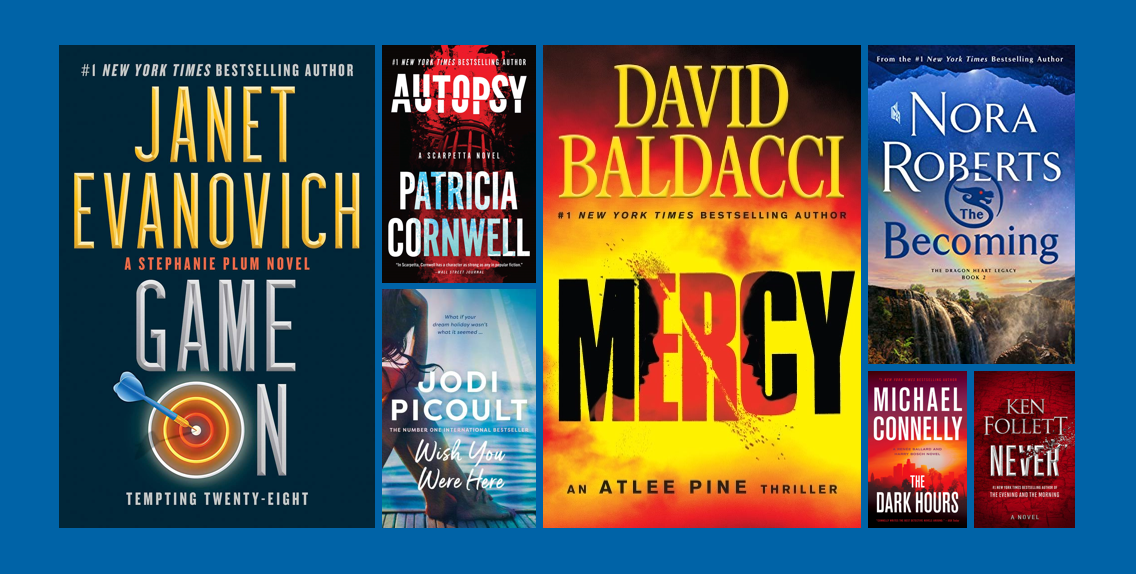 The air is crisp, the days are noticeably shorter, and there’s really no doubt that fall is here. And with fall, comes a batch of new November titles for adults to enjoy, especially from big name authors releasing books for the holidays. I suppose I should mention, though, that there are some supply chain issues that the publishing industry are dealing with, and there are a few books that have seen their publication dates pushed back. So if there is something you expected to see on this list, it might just be a matter of patience.

PS All of the below items are in the catalog and ready for you to place a hold. You can do that here.

The Stranger in the Lifeboat by Mitch Albom

Out of the Rain by V. C. Andrews

The Dark Hours by Michael Connelly

The Midnight Lock by Jeffery Deaver

The Sentence by Louise Erdrich

Go Tell the Bees that I Am Gone by Diana Gabaldon

The Missing Piece by John Lescroart

Fear No Evil by James Patterson

Wish You Were Here by Jodi Picoult

The Becoming by Nora Roberts

Mrs. Jeffries and the Midwinter Murders by Emily Brightwell

All About Me by Mel Brooks

The Brothers by Christopher Andersen

The Churchill Sisters by Rachel Trethewey

Filled with Fire and Light by Elie Wiesel

In Trump Time by Peter Navarro

The Jesus I Know by Kathie Lee Gifford

The Lyrics by Paul McCartney

Privatization of Everything by Donald Cohen and Allen Mikaelian

These Precious Days by Ann Patchett

Together by Jamie Oliver

Will by Will Smith

Woke Up this Morning by Michael Imperioli and Steve Schirripa

The Stranger in the Lifeboat by Mitch Albom

The Twelve Jays of Christmas by Donna Andrews

Over My Dead Body by Jeffrey Archer

Down the Hatch by M. C. Beaton

Murder is in the Air by Frances Brody

Better Off Dead by Lee Child

State of Terror by Hillary Rodham Clinton and Louise Penny

The Dark Hours by Michael Connelly

The Midnight Lock by Jeffery Deaver

The Forbidden by Heather Graham

The President and the Freedom Fighter by Brian Kilmeade (nonfiction)

When I Found You by Brenda Novak

Fear No Evil by James Patterson

Wish You Were Here by Jodi Picoult

Best in Snow by David Rosenfelt

The Butler by Danielle Steel

The Killing of Kenneth Chamberlain (Drama)

The Many Saints of Newark (Drama R)

One Night in Miami (Drama R)

Save the Wedding (Romance)

Who You Think I Am (Drama French)

Kevin Can F Himself 1

My Life is Murder 2

The Meaning of Hitler

Women Who Changed the World

The Rain Just Follows Me by Hawthorne Heights (rock)

What a Song Can Do by Lady A (country)

Queens of the Summer Hotel by Aimee Mann (rock)

Raise the Roof by Robert Plant and Alison Krauss (country)

Thank You by Diana Ross (r/b)

The Quest by Yes (rock)