After two months of #LibraryMadness, the end is here. We started with nominations in February, when it looked as if the comedy Schitt’s Creek would be the show to beat, and now here we are at the end of March with only two shows remaining. It’s been wild and fun and full of surprises, and now it’s time to decide.

Mister Roger’s Neighborhood was a staple of many childhoods for over 30 years. (And for that matter, it still is in reruns and online.) A multiple Emmy winner, the show is one of the first things that comes to many minds when thinking about quality children’s TV programming.

During its run, Friends was a cultural phenomenon, and thanks to streaming, it continues to remain so. From haircuts to how we think about coffeehouses, Friends has influenced society. Oh, and while it was at it, it made millions of people laugh during Must See TV on Thursday nights for 10 years.

So, which will win? You have until 11:59 on Tuesday, March 30 to decide. The winner will be announced the next day, including the winner of our gift card bundle. Leave your votes here in the comments, stop in the library and pick up a paper ballot, or vote on our social media. (@NCantonLibrary on Facebook, Instagram, and Twitter) 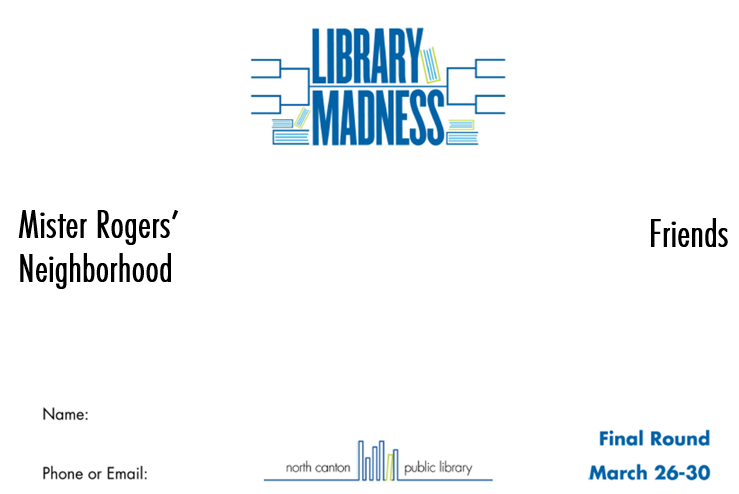