The featured book for October is Togo and Balto: The Dogs Who Saved a Town, written by Jodie Parachini and illustrated by Keiron Ward and Jason Dewhirst. 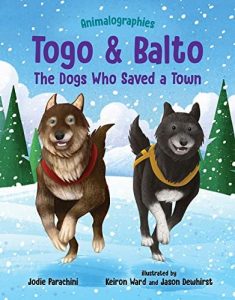 It was 1925 and the world was in a diptheria pandemic. The town of Nome, Alaska, needed the serum to save its children but there was only one way to get there: dog sled. Balto and Togo, two Siberian huskies, were part of the relay race that pushed through below-freezing temperatures and a blizzard to bring the serum to Nome.

If you and your family enjoyed this story, be sure to register for our Iditarod Trail Sled Dog Racing program taking place on Saturday, November 5 at 2:00 pm! Karen Land, along with her dogs Noggin and Chloe, will visit the Library to share their experiences racing in the famed Iditarod.

The North Canton Public Library’s StoryWalk® at Dogwood Park was made possible in part thanks to a generous gift from the estate of former North Canton resident Janet Daily (1934-2018) who was a kind advocate of books and reading.

The national StoryWalk® Project was created by Anne Ferguson of Montpelier, Vermont, and developed in collaboration with the Kellogg-Hubbard Library. StoryWalks® have been installed in all 50 states and several countries including Germany, Canada, England, Bermuda, Malaysia, and Pakistan.