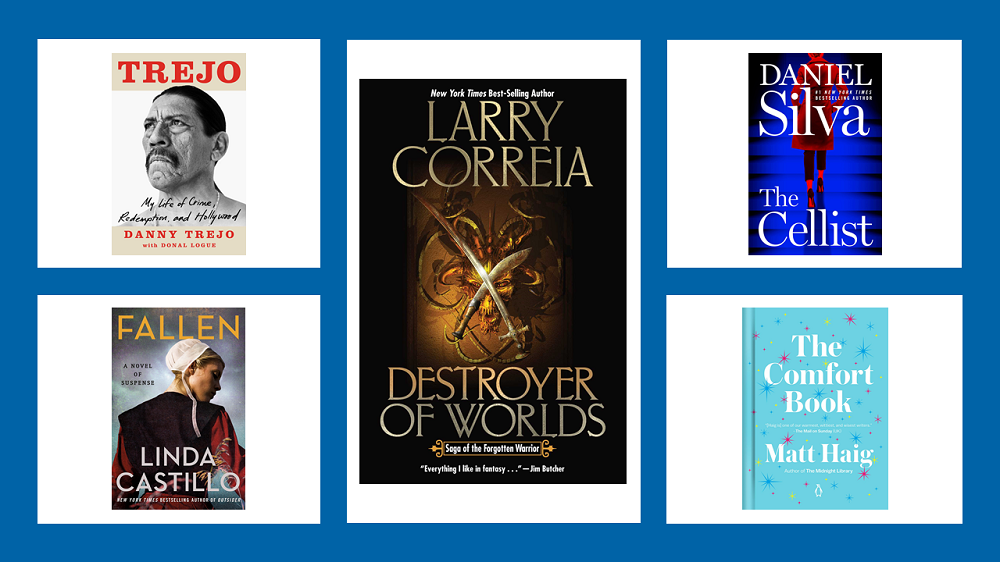 Today marks the start of a new month and that means new books, DVDs, and CDs. All of the items below are available for you to place a hold on, even if they haven’t made their way into the building yet. You can look for them here on our catalog. With a selection ranging from new Kathy Reichs to the latest season of The Walking Dead, we have something for everyone!

The Women’s March by Jennifer Chiaverini

The Bourne Treachery by Brian Freeman

The Shadow by James Patterson

The Bone Code by Kathy Reichs

The Cellist by Daniel Silva

Tender is the Bite by Spencer Quinn

The Physicians of Vilnoc by Lois McMaster Bujold

Destroyer of Worlds by Larry Correia

The Serpent by David Drake

Forever My Own by Tracie Peterson

The American War in Afghanistan by Carter Malkasian

The Authoritarian Moment by Ben Shapiro

Carry On by John Lewis

The Case of the Murderous Dr. Cream by Dean Jobb

Christianity and Wokeness by Owen Strachan

The Comfort Book by Matt Haig

The Howe Dynasty by Julie Flavell

Love After 50 by Francine Russo

The Man in the Iron Mask by Josephine Wilkinson

Never Put a Cactus in the Bathroom by Emily L. Hay Hinsdale

New Women of the Old West by Winifred Gallagher

Shades of Springsteen by John Massaro

Stories to Tell by Richard Marx

What White People Can Do Next by Emma Dabiri

When Thoughts and Prayers Aren’t Enough by Taylor S. Schumann

A Stranger in Town by Kelley Armstrong

The Heathens by Ace Atkins

Someone to Cherish by Mary Balogh

The Personal Librarian by Marie Benedict

A Tourist’s Guide to Murder by V.M. Burns

The Women’s March by Jennifer Chiaverini

Sunrise by the Sea by Jenny Colgan

The Recovery Agent by Janet Evanovich

The Bourne Treachery by Brian Freeman

The Sweetness of Water by Nathan Harris

Devil in Disguise by Lisa Kleypas

The Plot by Jean Hanff Korelitz

Not a Happy Family by Shari Lapena

The Shadow by James Patterson

The Sanatorium by Sarah Pearse

Forever My Own by Tracie Peterson

The Cellist by Daniel Silva

An Irish Hostage by Charles Todd

Where the Light Enters by Jill Biden

Bring Your Baggage and Don’t Pack Light by Helen Ellis

That Time of Year by Garrison Keillor

After the End (Drama)

The Conjuring: The Devil Made Me Do It (R Horror)

In the Heights (PG-13 Musical)

It Was Always You (G Drama Hallmark)

The Man in the Hat (Comedy)

Mix Up in the Mediterranean (Romance Hallmark)

When Calls the Heart: Pre-Wedding Jitters and Changing Times

A Crime on the Bayou

Life at the Waterhole

Since I Been Down

The Virus That Shook the World

Take the Sadness Out of Saturday Night by Bleachers (rock)

For Free by David Crosby (rock)

Crash of the Crown by Styx (rock)

Stand for Myself by Yola (rock)