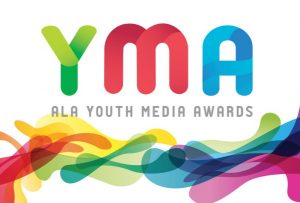 Every year at the American Library Association’s January conference, the Youth Media Awards are announced. These awards include the Newbery, Caldecott, and Printz awards, for the best book for children, best picture book, and best book for teens, respectively. I’m happy to say that we have in multiple formats all the 2020 winners that were announced yesterday, and we encourage you to check them out!

Seventh grader Jordan Banks loves nothing more than drawing cartoons about his life. But instead of sending him to the art school of his dreams, his parents enroll him in a prestigious private school known for its academics, where Jordan is one of the few kids of color in his entire grade.

As he makes the daily trip from his Washington Heights apartment to the upscale Riverdale Academy Day School, Jordan soon finds himself torn between two worlds—and not really fitting into either one. Can Jordan learn to navigate his new school culture while keeping his neighborhood friends and staying true to himself? (from HarperCollins)

Originally performed for ESPN’s The Undefeated, this poem is a love letter to black life in the United States. It highlights the unspeakable trauma of slavery, the faith and fire of the civil rights movement, and the grit, passion, and perseverance of some of the world’s greatest heroes. The text is also peppered with references to the words of Martin Luther King, Jr., Langston Hughes, Gwendolyn Brooks, and others, offering deeper insights into the accomplishments of the past, while bringing stark attention to the endurance and spirit of those surviving and thriving in the present. Robust back matter at the end provides valuable historical context and additional detail for those wishing to learn more. (from Houghton Mifflin Harcourt)

The Shoveler, the Freak, CanIHelpYou?, Loretta the Flea-Circus Ring Mistress, and First-Class Malcolm. These are the five teenagers lost in the Hemmings family’s maze of tangled secrets. Only a generation removed from being Pennsylvania potato farmers, Gottfried and Marla Hemmings managed to trade digging spuds for developing subdivisions and now sit atop a seven-figure bank account–wealth they’ve declined to pass on to their adult children or their teenage grandchildren. “Because we want them to thrive,” Marla always says. What does thriving look like? Like carrying a snow shovel everywhere. Like selling pot at the Arby’s drive-thru window. Like a first-class ticket to Jamaica between cancer treatments. Like a flea-circus in a double-wide. Like the GPS coordinates to a mound of dirt in a New Jersey forest. As the rot just beneath the surface of the Hemmings’ precious suburban respectability begins to spread, the far-flung grandchildren gradually find their ways back to one another, just in time to uncover the terrible cost of maintaining the family name. (from Penguin Random House)