Transform with Francis-Sharma (AKA read a good book) 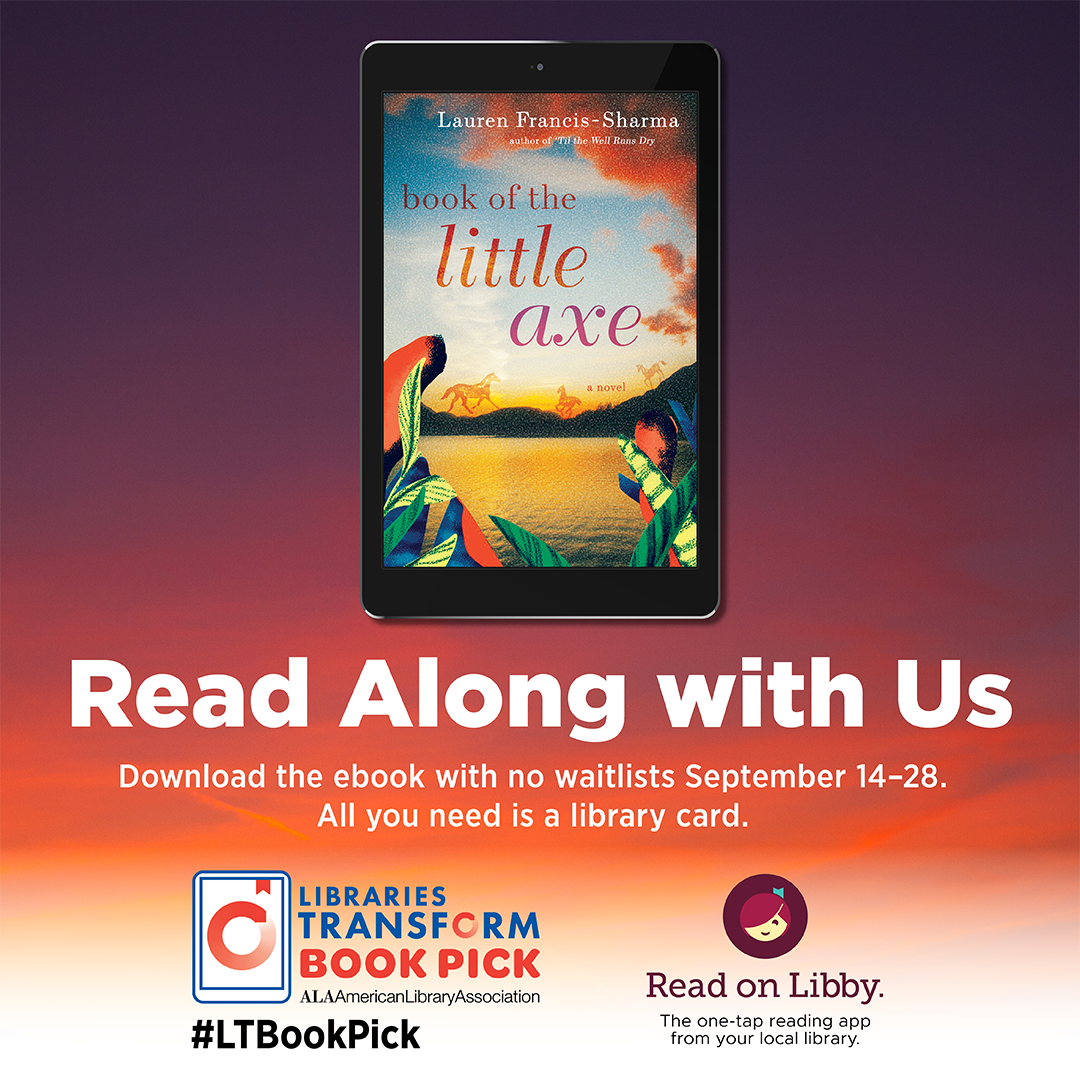 The American Library Association and OverDrive offer a fantastic online reading group called Libraries Transform Book Pick. The idea is to get library user across the country reading the same great book at the same time, all while talking about it with each other on social media. Their latest book is Lauren Francis-Sharma’s new novel, Book of the Little Axe, which has been getting great reviews and will make for wonderful discussion.

And reading and discussing the book will be a piece of cake for anyone with a library card. (You have one of those, right? If not, you can sign up for one on our website.) OverDrive has worked with the book’s publisher, Atlantic Monthly Press, an imprint of Grove Atlantic, to make unlimited copies of the ebook available for any library that gets ebooks from OverDrive. For us, that’s the Ohio Digital Library, which you quite likely use with the Libby app. So anytime between September 14 and September 28, you can check out a copy of the ebook.

And once you have the book and you’re reading it? Hop on social media and use the hashtag #LTBookPick to chat with other folks enjoying this book. And you should tag us @ncantonlibrary while you’re at it, because we would love to know what you think of the book. Sounds easy and fun, right?

You’re going to want to read this book, by the way. I wasn’t joking when I said it’s been getting great reviews. Publishers Weekly called it a “masterly epic” and it received a starred review from Library Journal. Here’s the publisher’s description:

In 1796 Trinidad, young Rosa Rendón quietly but purposefully rebels against the life others expect her to lead. Bright, competitive, and opinionated, Rosa sees no reason she should learn to cook and keep house, for it is obvious her talents lie in running the farm she, alone, views as her birthright. But when her homeland changes from Spanish to British rule, it becomes increasingly unclear whether its free black property owners—Rosa’s family among them—will be allowed to keep their assets, their land, and ultimately, their freedom.

By 1830, Rosa is living among the Crow Nation in Bighorn, Montana with her children and her husband, Edward Rose, a Crow chief. Her son Victor is of the age where he must seek his vision and become a man. But his path forward is blocked by secrets Rosa has kept from him. So Rosa must take him to where his story began and, in turn, retrace her own roots, acknowledging along the way, the painful events that forced her from the middle of an ocean to the rugged terrain of a far-away land.

PS To find out more about Libraries Transform and other American Library Association initiatives you can be a part of, check out I Love Libraries.