To Be or Not To Be…a Trivia Champion 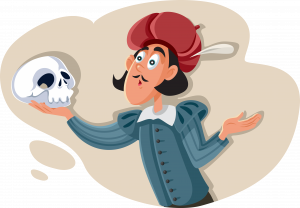 Parting is such sweet sorrow that I shall say good night till it be morrow.

The lady doth protest too much, methinks.

A horse! a horse! my kingdom for a horse!

I could easily go on all day throwing out Shakespeare’s most famous quotes, and I bet a lot of you could, too. But do you actually remember which plays these and other famous lines come from and who said them? Well, if you are a Shakespeare ninja when it comes to quotes, you are going to want to join us on Twitter during Shakespeare Week.

Monday, April 26-Thursday, April 29, we will be hosting Marry, Well Said, a trivia contest on Twitter where you have to either guess the play or the speaker of some of Shakespeare’s best loved lines. Each day there will be 5 quotes, and in addition to answering the polls, you’re going to want to retweet and like the polls for chances to win a gift card. (Bonus points will be awarded for folks who answer and RT with great gifs.)

Sounds easy and fun, right? The contest is open to Adults and Teens, so remember to keep an eye on our Twitter (@NCantonLibary ) during Shakespeare Week!

PS The opening quotes are from: Macbeth (said by Lady Macbeth), Romeo and Juliet (spoken by Juliet), Hamlet (said by the man himself), Julius Caesar (said by Antony), and Richard III (spoken by Richard III). Oh, and “Marry, well said,” is spoken by Polonius in Hamlet.