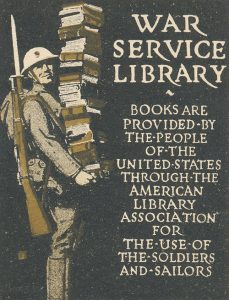 A War Service Library bookplate. Courtesy of the University of Illinois Archives

Would you like to hear my favorite story about working in a library? I think it’s an apt story for the week of the 4th of July, because, and I may be biased here, I think public libraries are one of the best things about America. This story is a pretty great example of why.

Many years ago when I worked at a different library, I had a regular patron who came in several times a week to just hang out and read and study. She walked everywhere and usually had a huge backpack with her, but she was always smiling and unfailingly friendly. One day she rushed in with another women, who she introduced as her sister. The sister had just gotten off a plane from Hong Kong where they grew up, and my longtime patron said the first place she wanted to bring her sister was to the library to get a card. Not to a store or a park or a favorite restaurant or even home. The library.

Anyhow, now that I’ve got myself all choked up about how much I love being a Librarian, let me dazzle you with some cool facts about American libraries.