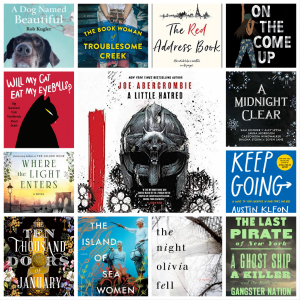 Last week I linked to some Best of the Year book lists from various websites and publications. This week, I come to you with the far more important North Canton Public Library Staff Picks for books published in 2019.

I suppose it’s only fair if I go first. I read several books published this year that I really loved. Heated Rivalry by Rachel Reid was by far my favorite romance, and I always look forward to new Jo Nesbo, and Knife didn’t disappoint. In nonfiction, I really enjoyed Rick Atkinson’s The British Are Coming, which is just the first of three books he has planned about the American Revolution, and I can’t wait to get my hands on the next two. And I feel like I should give a little push for Lights All Night Long by Lydia Fitzpatrick, a moving book about a Russian exchange student in Louisiana trying to help clear his drug addict brother of murder charges back home.

But my favorite book, the one I love most of all, is Joe Abercrombie’s A Little Hatred. If you’re a fantasy reader or someone looking to fill the Game of Thrones shaped hole in your life, Abercrombie is your guy. His books aren’t for the squeamish, with serious amounts of violence and sex and a generally bleak worldview, but the characters are as vivid as any you’ll find and the books are laugh out loud funny if you have a dark sense of humor.

That’s certainly not a book for everyone, though, so here’s what the rest of the staff had to say.

Nancy in Patron Services liked The Red Address Book by Swedish author Sofia Lundberg. It’s an historical romance in which 96-year-old Doris remembers life and loves past while flipping through her address book.

Niki, our newest addition in Adult and Teen Services, is a fan of Keep Going: 10 Ways to Stay Creative in Good Times and Bad by Austin Kleon, a nonfiction book for everyone with creative impulses.

Karen, also in Reference Services pretty much won’t stop talking about the fantasy novel The Ten Thousand Doors of January by debut novelist Alix E. Harrow, so please swing by the Reference Desk and talk to her about it.

Tori in Patron Services is a fan of The Night Olivia Fell by Christina McDonald, a book about a mother’s heartbreaking search for what really happened the night her pregnant teenage daughter fell off a bridge.

Stephanie, also of Patron Services, liked the hilariously titled nonfiction book Will My Cat Eat My Eyeballs? Big Questions from Tiny Mortals About Death by Caitlin Doughty. The book covers everything from why hair and nails look longer after death to whether or not grandma can have a Viking funeral. (I really hope the answer is yes.)

Steve in Technical Services (the folks who order and process the books, DVDs, and the rest) really loved the short story collection A Midnight Clear, which contains humorous Christmas fantasy tales.

Carolyn in Children’s couldn’t be contained, and she mentioned two books. There’s The Book Woman of Troublesome Creek, an historical novel by Kim Michele Richardson about a librarian in 1930s Appalachia. She also enjoyed A Dog Named Beautiful: A Marine, a Dog, and a Long Road Trip Home by Rob Kugler, a true story about a recent war veteran finding an escape from his grief with a three-legged chocolate lab.

Joann, also in Children’s, contained herself to one favorite book—Where the Light Enters, the second book in Sara Donati’s Waverly Place series of historical mysteries.

Elizabeth in Adult and Teen Services knows her YA books as well as anyone, and she loved On the Come Up, Angie Thomas’s follow up to her huge debut two years ago, The Hate U Give.

Back up in Children’s, Jamie is a fan of The Island of Sea Women by Lisa See, a story set in Korea about two women sea divers and their relationship through the Japanese occupation, WWII, the Korean War, and on to the current day.

And finally, Terri of Adult and Teen Services spent a good part of the year telling us all about the true account of The Last Pirate of New York: A Ghost Ship, a Killer, and the Birth of a Gangster Nation by Rich Cohen. It’s nonfiction, but by all accounts, reads like a good thriller.

So, there are a few recommendations if you’re looking for something to read.