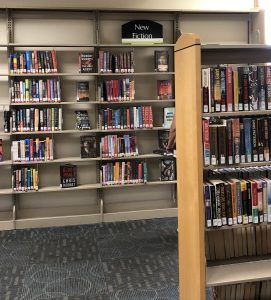 Can you actually believe that October is just two days away? Honestly, I’m still trying to figure out where the summer went, and I’m entirely reluctant to put my sandals away. And yet, here we are. On the upside, this means new books will be arriving, and we have a list of some of the adult books you can look forward to in October.

You can place holds on all of these items in our catalog here. (We know we’ve been having issues with our website and we’re working on it. If you don’t want to try navigating the website right now, may I suggest trying out our fantastic mobile app!)

And now for the books!

Murder is in the Air by Francis Brody

Duke of Caladan by Brian Herbert

Forever by Your Side by Tracie Peterson

Jingle All the Way by Debbie Macomber

Reclaiming Her Time by Helena Andrews-Dyer

I’ll Be Seeing You by Elizabeth Berg

Invent and Wander by Jeff Bezos

Where I Come From by Rick Bragg

Sun, My Heart by Dalai Lama

Violet Bent Backwards Over the Grass by Lana Del Ray

No Time Like the Future by Michael J. Fox

Success Is a Choice by John C. Maxwell

Empty Out the Negative by Joel Osteen

Murder of Innocence by James Patterson

Quick and Simple by Jacques Pepin

Best of Me by David Sedaris

Expect a Miracle by Danielle Steel

Happiness Becomes You by Tina Turner

Law of Innocence by Michael Connelly

Tom Clancy-Shadow of the Dragon by Marc Cameron

Piece of My Heart by Mary Higgins Clark and Alafair Burke

All that Glitters by Danielle Steel