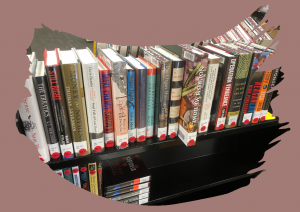 If you follow us on social media, you might have seen earlier today that we finally got in Ernest Cline’s new book Ready Player Two. That eagerly anticipated sequel is one of the last big releases of the year, publishing slowing down a bit in December after an especially hectic fall with so many spring and summer books being delayed because of COVID. But that doesn’t mean we aren’t still getting in some great new books this month, not to mention DVDs. Below is a list of some of the new adult stuff for December, as well as a teaser for some new things coming early next year. (How is it almost next year already?!) All of these items are ready to be placed on hold now in our catalog.

Before and Again by Barbara Delinsky

The Coffee Corner by Amy Clipston

The Art of Star Wars the Mandalorian by Phil Szostak

Barack Before Obama by David Katz

The Crooked Path to Abolition by James Oakes

The FBI Way by Frank Figliuzzi

God Will Help You by Max Lucado

How to Sleep by Rafael Pelayo

Walking with Ghosts by Gabriel Byrne

The Clutter Corpse by Simon Brett

Piece of My Heart by Mary Higgins Clark

No Time Like the Future (Nonfiction) by Michael J. Fox

The Awakening by Nora Roberts

A Blessing to Cherish by Lauraine Snelling

The Dark and the Wicked (Horror)

Hallmark 2-Movie Collection: Love in the Forecast & Romance in the Air (Romance)

The War with Grandpa (Comedy)

Into the Labyrinth (Suspense Italian)

The Adventurers of Modern Art

The Scorpion’s Tail by Lincoln Child and Douglas Preston

Before She Disappeared by Lisa Gardner

The Lost Boys by Faye Kellerman

Just As I Am by Cicely Tyson

Let Me Tell You What I Mean by Joan Didion