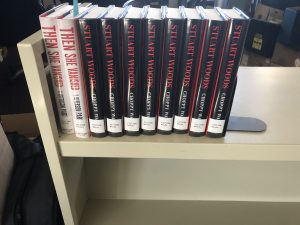 It’s already the second week in August, but I haven’t had a chance to tell you all about the great new adult books and DVDs the library has for you this month. (Confession—I was on vacation last week, and I didn’t even think of getting this ready before I left. Sorry!) But as a believer in better late than never, here are just some of what we have new this month. (And keep an eye out for a teaser covering some of the items we will be getting in September and you can already place holds on.)

Thick as Thieves by Sandra Brown

Truth and Justice by Fern Michaels

Then She Vanished by T. Jefferson Parker

Mums and Mayhem by Amanda Flower

Spine of the Dragon by Kevin Anderson

Space Station Down by Ben Bova

Thick as Thieves by Sandra Brown

Boy from the Woods by Harlan Coben

One Little Lie by Colleen Coble

Golden in Death by JD Robb

Blessing to Cherish by Lauraine Snelling

Waiting for the Barbarians (Drama)

Orange is the New Black 7

In My Room (Drama German)