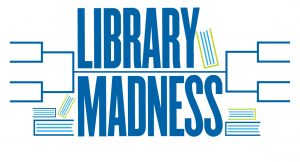 What’s the best movie ever? You get to help decide during the North Canton Public Library’s Second Annual #LibraryMadness event! (And have a chance to win a prize to boot.)

At noon Saturday, February 1, start nominating your favorite movies either at the Library or online by tagging the Library on Facebook, Instagram, or Twitter (@NCantonLibrary) and using the hashtag #LibraryMadness. Nominations end on February 23.

On March 1, the bracket with 64 of the greatest movies ever goes live!

Movies will be ceded by the number of nominations they receive into four Divisions: Oz, Casablanca, Gotham, and Hollywood. Voting for each round lasts 5 days.

One lucky participant will win a movie-themed gift basket!

Selecting the movies
• You can nominate up to 64 movies either at the library or online between February 1 and 23.
• Only one movie per franchise will make it into the tournament.
• If the movie you are nominating shares a title with another movie, be sure to include the year of its release.

Voting
• Everyone may vote for all the matchups in every round one time.
• Voting can be done in person or online. At the library, voting sheets will be available at the Reference Desk. To vote online, tag the library and use the hashtag #LibraryMadness on Facebook, Instagram, or Twitter. (@NCantonLibrary)
• Voting always begins at Noon and ends at 11:59 pm/Midnight of on the date given.