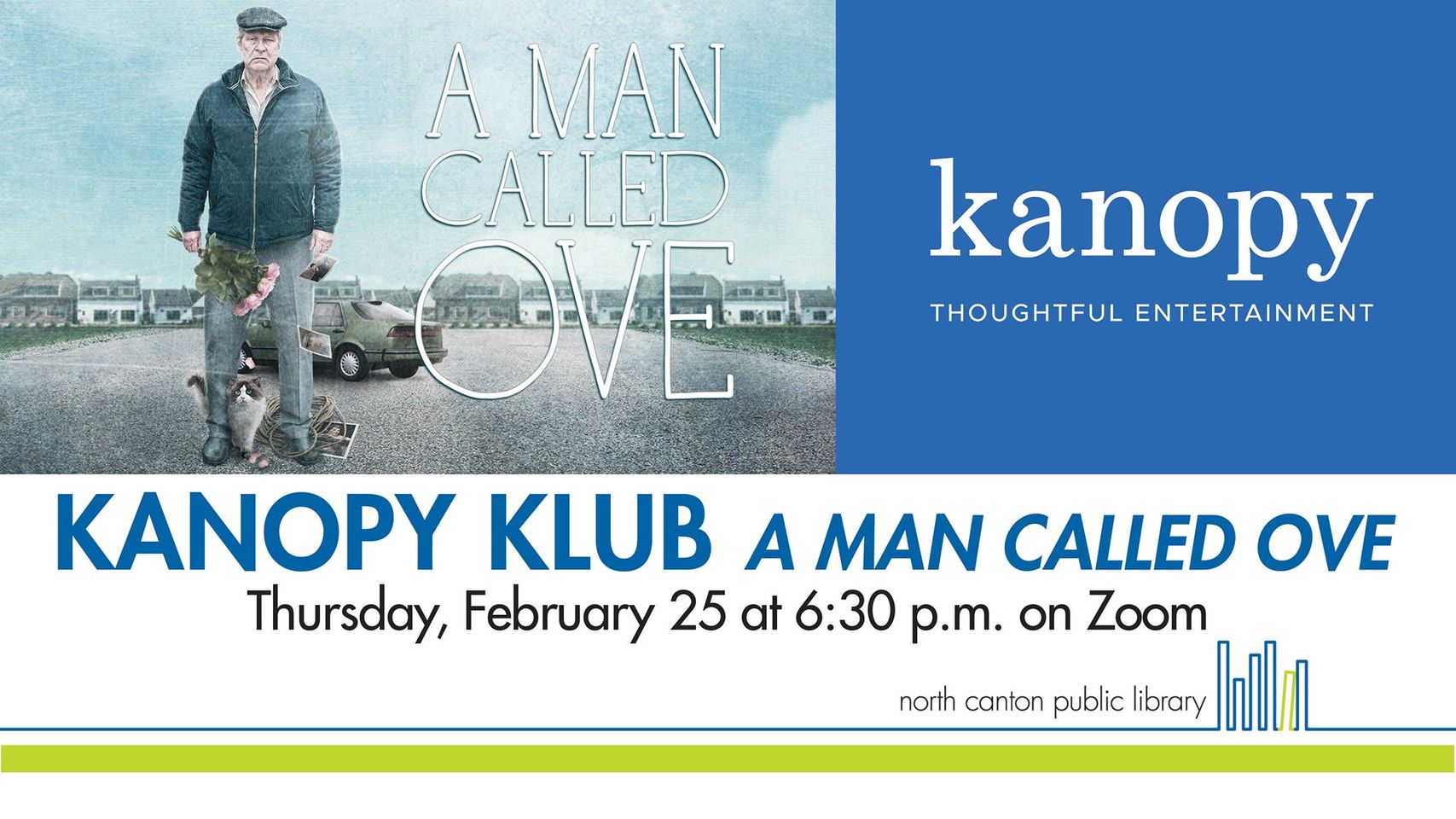 Next week on Thursday the 25th at 6:30 pm, I am going to be hosting our first Kanopy Klub program, and I’m really excited about this. Kanopy is one of our streaming video services, and they have a fantastic selection of foreign films, art house movies, documentaries, and so much more.

The idea of Kanopy Klub is a lot like a book club—we all watch the same movie ahead of time and then discuss it. The first movie I selected is A Man Called Ove. This Swedish movie is based on the popular bestselling novel about a widower learning to finding meaning in life again thanks to the people in his community. I’ll admit that I might have needed a few tissues when I watched it, but I’m an easy cry, and honestly, sometimes it’s wonderful to find a movie that moves you that much. Also, I think it will lead to a great conversation, which is ultimately why I selected it.

After A Man Called Ove, what’s next? Well, that’s one of the things we will be discussing at the meeting in addition to the movie. Below I’ve listed the movies I’m considering, if you want to get a head start on thinking about what might be our next pick.

If you’d like to watch A Man Called Ove, check it out on Kanopy. If you need some help using the service, my handout might help. And if you would rather not stream it for any reason, we do have copies of the DVD at the Patron Services desk. To register for this discussion, sign up here!

Information from Kanopy, IMDB, and Rotten Tomatoes. Summaries edited for clarity and length.

Chico and Rita (Unrated by the MPAA. Contains moderate nudity, violence, drug use, and language)
Cuba, 1948. Chico is a young piano player with big dreams. Rita is a beautiful singer with an extraordinary voice. Music and desire unite them as they chase their dreams and each other from Havana to New York to Paris, Hollywood and Las Vegas. With an original soundtrack by legendary Cuban pianist and five-time Grammy-winning composer Bebo Valdes, Chico & Rita captures a defining moment in the evolution of history and jazz, and features the music of (and animated cameos by) Thelonious Monk, Charlie Parker, Cole Porter, Dizzy Gillespie, Woody Herman, Tito Puente, and others.
Language: Spanish
Quality: 87% Rotten Tomatoes, Nominated for Best Animated Film Oscar

Dial M for Murder (Rated PG with mild violence and smoking/alcohol/drug use)
Ex-tennis pro Tony Wendice (Ray Milland) wants to have his wealthy wife, Margot (Grace Kelly), murdered so he can get his hands on her inheritance. When he discovers her affair with Mark Halliday (Robert Cummings), he comes up with the perfect plan to kill her. He blackmails an old acquaintance into carrying out the murder, but the carefully-orchestrated set-up goes awry. Now Wendice must frantically scheme to outwit the police and avoid having his plot detected.
Language: English
Quality: 89% Rotten Tomatoes, Nominated Directors Guild of America

The Farewell (Rated PG for thematic material, brief language and some smoking)
In this funny, heartfelt story, Billi’s (Awkwafina) family returns to China under the guise of a fake wedding to stealthily say goodbye to their beloved matriarch—the only person that doesn’t know she only has a few weeks to live.
Language: English, Mandarin
Quality: 98% Rotten Tomatoes, Golden Globe for Best Actress

Ida (Rated PG-13 for thematic elements, some sexuality and smoking/mild nudity)
18-year old Anna (Agata Trzebuchowska), a sheltered orphan raised in a convent, is preparing to become a nun when the Mother Superior insists she first visit her sole living relative. Naive, innocent Anna soon finds herself in the presence of her aunt Wanda, a worldly and cynical Communist Party insider, who shocks her with the declaration that her real name is Ida and her Jewish parents were murdered during the Nazi occupation. This revelation triggers a heart-wrenching journey into the countryside, to the family house and into the secrets of the repressed past, evoking the haunting legacy of the Holocaust and the realities of postwar Communism.
Language: Language: Polish
Quality: 96% Rotten Tomatoes, Best Foreign Language Film Oscar

Jiro Dreams of Sushi (Rated PG for mild thematic elements and brief smoking)
A thoughtful and elegant meditation on work, family and the art of perfection, chronicling Jiro Ono’s life as both an unparalleled success in the culinary world and a loving yet complicated father.
Language: Japanese
Quality: 99% Rotten Tomatoes

Journey to Italy (Unrated by the MPAA. Contains mild smoking/alcohol/drug use)
Roberto Rossellini’s Journey to Italy charts the declining marriage of a couple from England (Ingrid Bergman and George Sanders) on a trip in the countryside near Naples. More than just the anatomy of a relationship, Rossellini’s masterpiece is a heartrending work of emotion and spirituality.
Language: English
Quality: 96% Rotten Tomatoes

Purple Noon (Rated PG-13 for violence and mild drinking)
This ripe, colorful adaptation of Patricia Highsmith’s novel The Talented Mr. Ripley, directed by the versatile Rene Clement, stars Alain Delon as Tom Ripley, a duplicitous American charmer in Rome on a mission to bring his privileged, devil-may-care acquaintance Philippe Greenleaf back to the United States. What initially seems a carefree tale of friendship soon morphs into a thrilling saga of seduction, identity theft, and murder.
Language: French
Quality: 95% Rotten Tomatoes

Rashomon (Unrated by the MPAA. Contains mild sexuality, violence, and profanity)
This riveting psychological thriller that investigates the nature of truth and the meaning of justice is widely considered one of the greatest films ever made. Four people give different accounts of a man’s murder and the rape of his wife, which director Akira Kurosawa presents with striking imagery and an ingenious use of flashbacks. This eloquent masterwork and international sensation revolutionized film language and introduced Japanese cinema to the Western world.
Language: Japanese
Quality: 98% Rotten Tomatoes, Best Foreign Language Film Oscar

Seven Samurai (Unrated by the MPAA. Contains mild nudity, drinking and smoking, and battle scenes)
One of the most thrilling movie epics of all time, Seven Samurai tells the story of a 16th Century village whose desperate inhabitants hire the eponymous warriors to protect them from invading bandits. The film seamlessly weaves philosophy and entertainment, delicate human emotions and relentless action, into a rich, evocative, and unforgettable tale of courage and hope.
Language: Japanese
Quality: 100% Rotten Tomatoes, Nominated for 2 Oscars

Whale Rider (Rated PG-13. Contains brief language and a momentary drug reference)
On the east coast of New Zealand, the Whangara people believe their presence there dates back a thousand years or more to a single ancestor, Paikea, who escaped death when his canoe capsized by riding to shore on the back of a whale. From then on, Whangara chiefs, always the first-born, always male, have been considered Paikea’s direct descendants. Pai, an 11-year-old girl, believes she is destined to be the new chief. But her grandfather Koro is bound by tradition to pick a male leader. Pai loves Koro more than anyone in the world, but she must fight him and a thousand years of tradition to fulfill her destiny.
Language: English
Quality: 91 % Rotten Tomatoes, Nominated for Best Actress Oscar