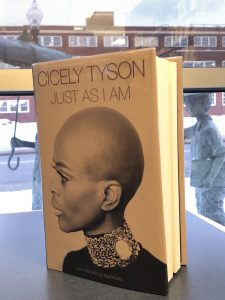 It’s a new month, and that means new stuff! Below is a list of new Adult Fiction, Nonfiction, and Large Print. There’s also a list of new DVDs and CDs. I’m actually going to try and feature some of our music collections more often, so be sure to keep an eye out for that!

In the meantime, take a look at what’s rolling in this month, and place everything you’re interested in on hold in our catalog. We also now have the late Cicely Tyson’s new memoir, Just as I Am available, so be sure to place your hold on that as well!

The Kaiser’s Web by Steve Berry

The Four Winds by Kristin Hannah

Blink of an Eye by Iris Johansen

The Vineyard at Painted Moon by Susan Mallery

Guilt at the Garage by Simon Brett

The Body on the Train by Frances Brody

A Simple Murder by Linda Castillo

Missing and Endangered by J. A. Jance

A Fatal Lie by Charles Todd

The Children of D’Hara by Terry Goodkind

From This Moment by Kim Vogel Sawyer

The Keepsake Sisters by Lori Wilde

Her Secret Song by Mary Connealy

The Wrong Family by Tarryn Fisher

Shall We Dance by Shelley Shepard Gray

The Midnight Library by Matt Haig

Blink of an Eye by Iris Johansen

The Last Garden in England by Julia Kelly

Walk in My Combat Boots by James Patterson

Faithless in Death by JD Robb

A Fatal Lie by Charles Todd

Murder in Canaryville by Jeff Coen

The Plague Cycle by Charles Kenny

A Shot in the Moonlight by Ben Montgomery

Sister of the Groom (R Comedy)

We Got This (Drama)

The Parlor by Alabama Slim

Living in a Burning House by Selwyn Birchwood

Things She Couldn’t Get Over by Dale Ann Bradley

Hunter and the Dog Star by Edie Brickell & the New Bohemians

Chemtrails Over the Country Club by Lana Del Rey

In the Green Musical cast recording

The Way It Feels by Maddie and Tae

Nobody is Listening by Zayn Malik

News of the World Original Score

Songs for the Drunk and Broken Hearted by Passenger