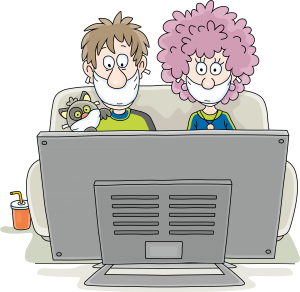 We are working hard to create content and meet your needs during this stay-at-home time, but we’re still making time to get lost in our favorite shows too! Looking for something to watch? We’re here to offer our favorite binge worthy picks!

Christina
Most importantly, I finished the final season of Schitt’s Creek, which I am certain is the best show to be made in at least a decade. It’s “simply the best,” and you will not convince me otherwise. It provides a happy escape from pandemic life. Protip: give it a couple of episodes to become amazing.

My 13-year-old son and I are watching Parks and Recreation, which neither of us had watched before. It’s easy and fun.

I’ve also watched Succession. We noticed that it received some award nominations this year so decided to check it out. Can’t wait for season 3 to be released!

And because it feels like a good friend, I’ve been watching The West Wing again. If you haven’t watched The West Wing, I’m pretty sure it’s time you do. I even convinced my parents to watch it (finally) and they are watching several episodes a week and LOVING it.

Elizabeth
Although I actually haven’t been watching TV too much, I did watch Tiger King on Netflix. It is kinda like one of those train wrecks where you can’t look away, even though you should. Each episode and person is more outrageous than the last. And do I go around singing the TikTok song constantly….? YES, unfortunately. (Carole Baskin. Killed her husband, whacked him. Can’t convince me that it didn’t happen. Fed him to Tigers, they snackin. What’s happening. Carole Baskin)

Also, I have been re-watching some of the Parks and Recreation episodes, when I want something short and funny. I love these characters so much, even though they hate the library! 🙁

Shelia
Honestly, I’m a binge watcher even when I’m not at home all the time. In the month leading up to isolation, Netflix brought back all my favorite shows, and I binged new seasons of Altered Carbon, Narcos: Mexico, and Babylon Berlin. (Aside—I think Babylon Berlin might be my favorite TV show right now. It’s definitely for mature audiences, as there’s some nudity and violence, but it’s this incredibly layered mystery set between the wars in Germany, and it’s just so well made and acted. I can go on about this show all day!)

Anyhow, since the stay at home order came out, I’ve also binged the newest season of Elite, a teen soap mystery from Spain. And in addition to all this Netflix, my husband and I are rewatching Game of Thrones, and we just finished up Season 2. But we might put that on hold until we watch the newest season of the Spanish crime series Money Heist. We’ve actually been holding off on Money Heist, because it’s a show that once we start watching, we can’t stop, and we want to make sure we have a couple days in a row with absolutely nothing else happening before we hit play!

Take this time to binge watch something you love and  check off that square on our community engagement “bingo” board.