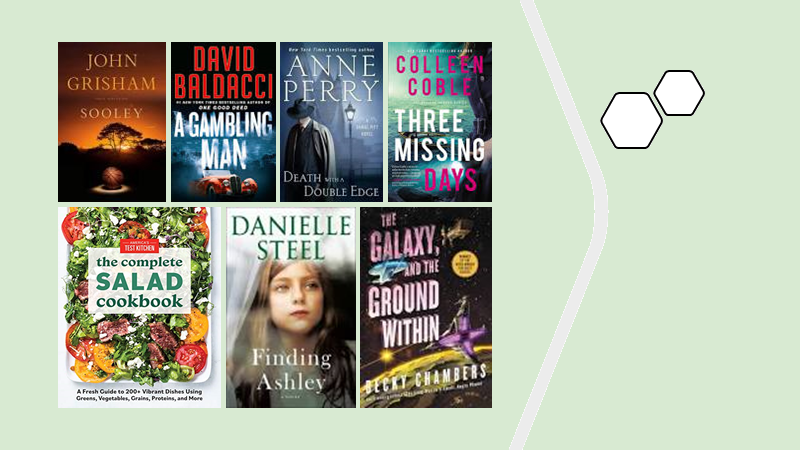 Welcome to April, a month when it still snows in Ohio. Sigh. But there are things to be happy about today, including a peek at all the new stuff coming this month. There are definitely some cookbooks I think folks will be excited about. (Two new America’s Test Kitchen books, anyone?) For fiction fans, there’s new John Grisham, Danielle Steel, and David Baldacci. There’s also new music for every taste, from Nick Jonas to Liza Minnelli. In DVDs we have the Oscar nominated Nomadland on Blu-ray (the DVD is coming soon!) and more.

In other words, whatever it is you’re looking for, April is sure to bring something new and exciting for everyone. All the listed items are available for you to start placing holds in our catalog here.

A Gambling Man by David Baldacci

When a Stranger Comes to Town by Michael Koryta

The Bookstore on the Beach by Brenda Novak

Miss Julia Happily Ever After by Ann B. Ross

The Darling Dahlias and the Voodoo Lily by Susan Albert

Death with a Double Edge by Anne Perry

Dance with Death by Will Thomas

The Galaxy, and the Ground Within by Becky Chambers

The Last Watch by J.S. Dewes

The Cottage on Lighthouse Lane by Davis Bunn

A Piece of the Moon by Chris Fabry

A Distant Shore by Karen Kingsbury

The Art of Star Wars Galaxy’s Edge by Amy Ratcliffe

A Brief History of Earth by Andrew H. Knoll

Broken (in the Best Possible Way) by Jenny Lawson

Cook for Your Gut Health by America’s Test Kitchen

Don’t Call it a Cult by Sarah Berman

The Generals Have No Clothes by William M. Arkin

The God Equation by Michio Kaku

The Haunting of Alma Fielding by Kate Summerscale

The Invention of Miracles by Katie Booth

Murder at the Mission by Blaine Harden

The Myth of Artificial Intelligence by Erik J. Larson

On the House by John Boehner

Storm in a Teacup by Helen Czerski

They Never Let a Crisis Go to Waste by Jason Chaffetz

The Water Will Come by Jeff Goodell

The World According to Ben Stein by Ben Stein

A Gambling Man by David Baldacci

Handbook for Homicide by Lorna Barrett

The Grim Reader by Kate Carlisle

Meant to Be by Jude Deveraux

Danger in Numbers by Heather Graham

The Four Winds by Kristin Hannah

The Other Emily by Dean Koontz

When the Stars Go Dark by Paula McLain

The Bookstore on the Beach by Brenda Novak

Miss Julia Happily Ever After by Ann B. Ross

A Pain in the Ass (PG Comedy French)

The Literary Genius of Shakespeare

Oliver Sacks: His Own Life

Secrets in Our DNA

The Day before Halloween by Atmosphere

Alone with My Faith by Harry Connick, Jr.

No Harm Done by Josephine Foster

When You See Yourself by Kings of Leon

On Earth, and In Heaven by Robin Thicke